WITH THIS BREATH I FLY

Filmed over ten years, WITH THIS BREATH I FLY follows two courageous women as they fight for their freedom against a patriarchal Afghan society determined to keep them bound to tribal culture, while exposing the complicity of the European Union in censoring their voices.   This documentary – along with the international press – forever alters the course of their lives.

“WITH THIS BREATH I FLY is a remarkable documentary.  I strongly encourage anyone with a beating heart and inquisitive eyes to watch it as soon as possible.” – Benjamin Franz, Film Threat

“The oppressed legal status of women in Afghanistan is well known and even more distressing with the recent Taliban takeover.  Providing important insights, in particularizing the experiences of two Afghan women, directors Clementine Malpas and Sam French add alarming details to that more general understanding of exactly what this lived legal, cultural subjugation means and the ways even the European Union supports that inequitable system.” – Alliance of Women Film Journalists

“It is our hope that the international community does not forget the women of Afghanistan.  WITH THIS BREATH I FLY is dedicated to them.” – filmmaking team

NOTE: THE FILMMAKERS HAVE SPENT OVER A DECADE OF THEIR LIVES WITHOUT COMPENSATION AND AT GREAT RISK, GETTING THIS FILM OUT TO THE WORLD SO THAT THE VOICES OF THESE TWO COURAGEOUS WOMEN CAN BE HEARD.   WE WOULD BE VERY GRATEFUL TO OUR MEMBERS WHO SUPPORT THE MAKERS OF THIS IMPORTANT FILM BY ATTENDING THE SCREENING.  PART OF YOUR TICKET PURCHASE GOES TO THE FILMMAKERS. 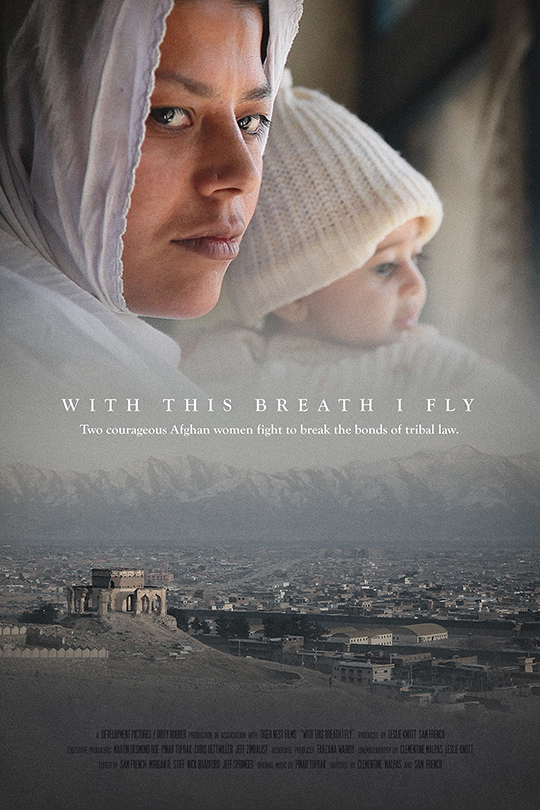