SOLD OUT. Tickets for seating in the front 3 rows will be available at the door after 7 p.m.

THIS DOCUMENTARY IS BEST VIEWED WITH NO ADVANCE INFORMATION ABOUT THE TURNS THIS REMARKABLE STORY TAKES, so please avoid reading reviews that give anything away.   I CAN TELL YOU THAT THIS IS A FILM YOU WILL NOT WANT TO MISS.

“THREE IDENTICAL STRANGERS may be non-fiction but it’s structured and composed like the best short story you’ve never heard.   And it’s one that definitely proves the dictum that life is stranger than fiction.” – Brian Tallerico, RogerEbert.com

“The surprises just keep coming in Tim Wardle’s documentary, which starts in the realm of the remarkable and is likely to leave jaws dropped by record proportions by the time the credits roll.” – Amber Wilkinson, Eye for Film

“Wardle deserves credit for journalistic doggedness and also for making a documentary that plays like a nerve-jangling thriller.” – Dan Callahan, TheWrap

“THREE IDENTICAL STRANGERS is shocking, thrilling, and wildly entertaining, but it’s also incredibly moving, leaving a lasting impression that you won’t easily shake.   I have a feeling this is a film we’re going to be talking about for a long time to come.” – Adam Chitwood, Collider 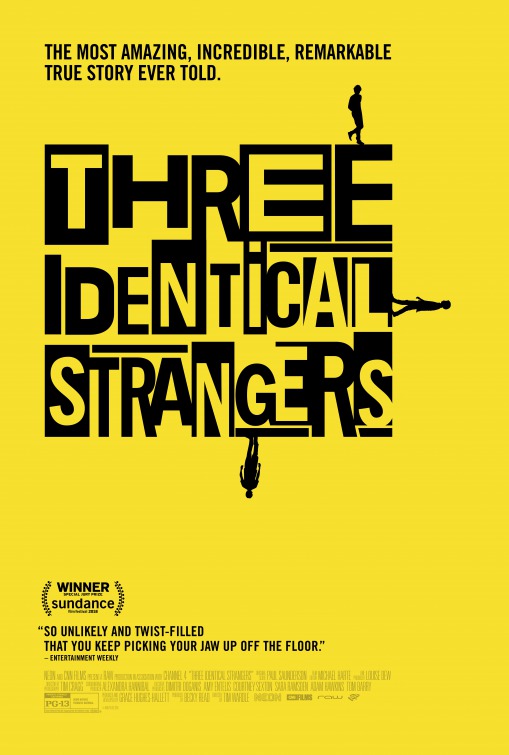